Palestinian and plastic shoes soon in the German market 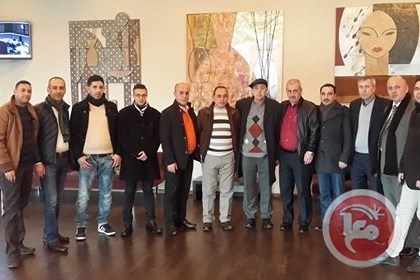 Hebron – Ma’an – returned to the homeland board member of the Hebron Chamber of Commerce and coordinator of relations in the room Mohiuddin Sayed Ahmed, and a delegation footwear sector after their participation in the international shoe fair in the city, “Dezldorf” German, and participate in the exhibition of fruits and International vegetables in the capital Berlin.
He explained Sayed Ahmed said post-Khalili delegation at the exhibition running shoes, has had a good effect on attending the show, where the members of the delegation who represent nine companies and factories for shoes to hold bilateral meetings with marketers and businessmen Germans and Europeans, during which members of the delegation to provide a detailed explanation of their industry, citing models they had took her with them from Hebron industry.
Majid said Zoughair owner of a shoe factory took part in the exhibition: “We thank Mohiuddin Sayed Ahmed, coordinator of relations in the Hebron Chamber of efforts, for his efforts and helping us to meet with many marketers in the show, and we do not want to anticipate the details, we had a good talk and good with these marketers, and we hope that will be translated into words chatter during the coming period. “

Osman Hassouna chairman Zamzam Plastic Industries, said that he would communicate with the Turkish business man and arranged to hold a meeting to discuss the ways and possibilities to export his products to world markets.
Hassouna said: “plastic industries in Hebron enjoys a good reputation, has made great strides over the years to keep the industry and progress and develop for the better, and the adoption of international quality standards.”

He said Syed Ahmad: “My expectations that the shoes and leather Palestinian industry in general and Alhalilih witness in particular, demand in the German market and the EU, and the shoe-Khalili industry continues to receive the attention and appreciation by the Germans marketers, given the world for its quality, where it was not the boot still Khalili sold in the market German, but in small quantities, and we hope that these volumes will grow during the coming period. ”
On the sidelines of the vulnerable, Sayed Ahmed, has held a meeting with Turkish businesspeople, during which they discussed the possibility of exporting Alhalilih plastics industry to the German market and into the global Kheir markets, explaining that it had made a booklet for one of the World in the field of plastic industry companies have expressed admiration for these products, expressing It hoped to communicate with the company to do business with them.
For his part,